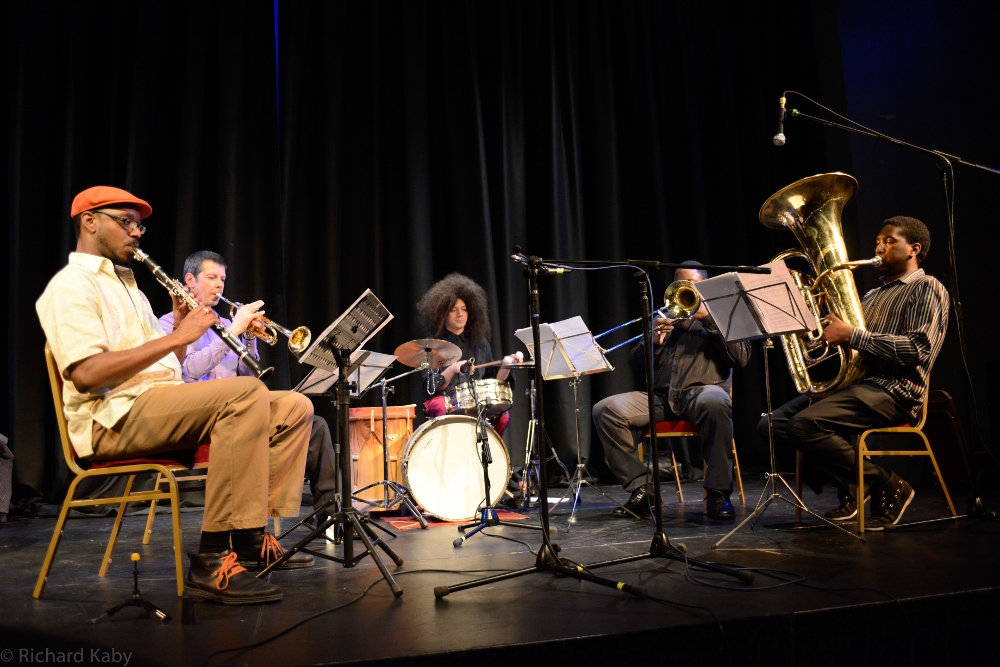 A new work by Shabaka Hutchings exploring what folk means in a contemporary and industrialised context.

Shabaka Hutchings was born in England and raised in Barbados – where he began his musical journey. There he played in local calypso bands, classical ensembles and various jazz groups. In 2003 he was awarded a place at the Guildhall School of Music and Drama, where he completed a degree in
classical clarinet.

Shabaka has shared the stage with many top jazz musicians and ensembles, including Jack de Johnette, Charlie Haden, the trip-hop group Red Snapper, and Jerry Dammers’ Spatial AKA orchestra at the Barbican Centre. He is part of the London community of younger jazz musicians, and has recorded and performed in numerous ensembles. In 2010, Shabaka was named BBC Radio 3 New Generation Artist.

His latest project is the group Sons of Kemet, with Seb Rochford and Tom Skinner on drums, and Oren Marshall on tuba. This group explores Shabaka’s Caribbean heritage.

Trombonist Harry Brown was fortunate that he not only had a musical family (his first band was with his sisters), but that he also studied at the Kingsdale School, which had a highly respected music department. “This was fundamental to my musical development,” says Brown. “We had enthusiastic teachers like my first trombone teacher Tony Hogg – I remember the old Blessing I used to play on. And there were many different musical ensembles that I was able to join.” But it was at the Centre for Young Musicians that Brown’s playing really took off. “We did various ensembles/orchestras and did many international tours and concerts – I remember playing at the Barbican and the Royal Festival Hall.”

Brown’s musical pathway and interests have always been finely balanced between the jazz and classical genres. “I did a Master of Music Degree in Performance at the Royal Academy of Music which took in a range of influences – from Coltrane to Stockhausen. I was trying to raise the level of jazz music analysis to the same level as that of the classical composers and their output.”

Theon Cross is a young musician currently studying at the Guildhall school of Music and Drama. He has performed with many musicians in ensembles including the Nu Civilisation Orchestra, NYJO, Tomorrow’s Warriors, The Grand Union Orchestra, Dan Zanes and friends, Abram Wilson’s delta blues project, Tom Challenger’s Brass Mask and more. He has played in studio recordings for Channel 4, BBC Radio 3 and Japanese pop star Ayumi Hamasaki. Theon has also performed in various famous music venues such as the Royal Albert Hall, Queen Elizabeth Hall, The Barbican and the Royal Festival Hall.

Seb Rochford is a British drummer and bandleader who spans many musical genres. He comes from Aberdeen and has a large family of 2 brothers and 7 sisters. His father is an accomplished
Scottish poet.

Seb has worked extensively with Joanna MacGregor and Andy Sheppard; leads the band Fulborn Teversham, and has an improvising duo with Leafcutter John. He drummed for Pete Doherty, with his band Babyshambles, in the early days, and has continued to make guest appearances with them. Recently Seb has been working with Corrine Bailey Rae and Herbie Hancock.