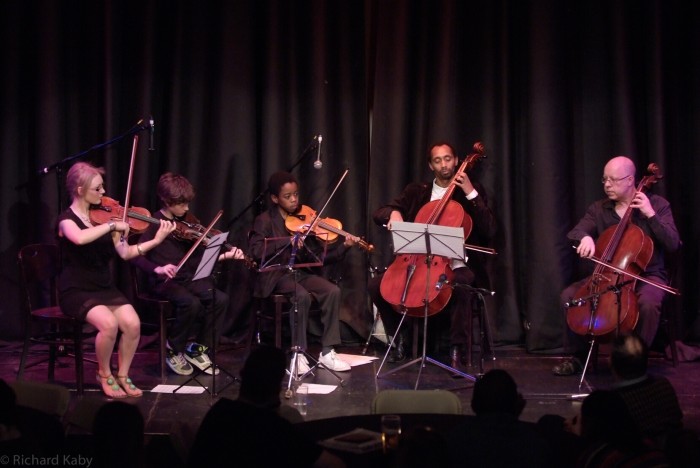 Tunde Jegede  is a composer and multi-instrumentalist who is uniquely placed between the worlds of Contemporary Classical and African Classical Music. He plays and performs on the Cello, Kora (West African Harp Lute), Piano and Percussion.

After a classical training at Oxford University playing cello, Richard Bolton has become one of the unsung heroes of the London jazz scene, where he is highly respected for his sensitive and versatile guitar playing.

Billy Hill has been playing folk fiddle since he was seven, and learns with Pete Cooper. He’s been performing in festivals and folk clubs for the last three years, and has won several awards and competitions, including Battle of the Buskers (People’s Choice)

Michael Hollette Although not musical herself, Michael’s mother introduced him to music when he was still very little, as she wanted to involve him in all sorts of new experiences. Aged 6, Michael started learning the violin. Now 12, he also plays bassoon, piano, orchestral percussion, steel pans, flute and cornet. Michael is also keen on a wide range of musical styles – playing the bassoon in a Romany Gypsy Band or experimenting with jazz on the recorder.

Isabella Kolaczynska is a young musician, who is just completing her studies of classical violin at Wells, the internationally renowned specialist music school. Previously, she has twice won the string solo prize at the National Urdd Eisteddfod and toured with the Children’s Orchestra of Great Britain. Her ambitions are to work as a solo classical violinist as well as continuing to collaborate with other musicians on innovative works and projects.